A team of staff from Epsom and St Helier hospitals have taken on the three highest peaks in the United Kingdom to raise money for their Critical Care Unit.

The 30 members of staff were picked up by minibus from the front of St Helier Hospital on the evening of Friday 20 August before travelling overnight to Ben Nevis in the Highlands of Scotland, which they began to climb at 9am on Saturday morning. After eight hours of walking, the team had summited the mountain and returned safely, and so after a quick meal, it was time to get back on the minibus to drive to Scafell Pike in the Lake District, which they began to climb at 3am on Sunday morning. 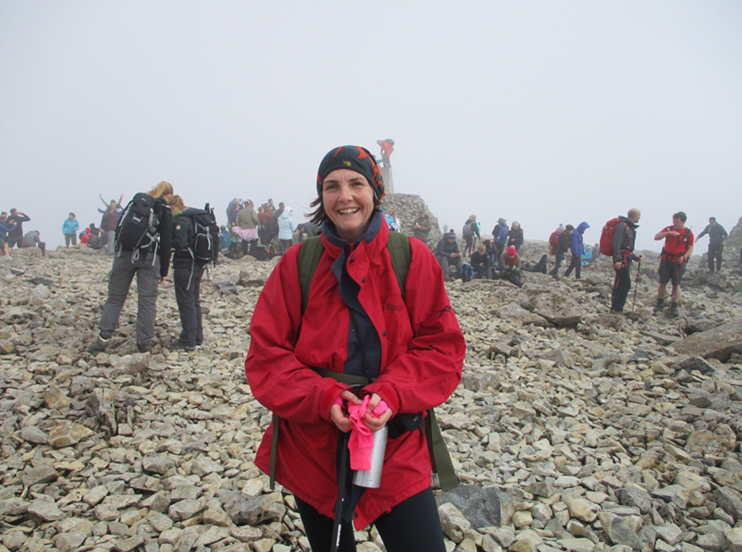 Sadly, heavy storms meant that a river crossing on Scafell was too dangerous to attempt, and the team had to return to the bus after climbing a third of the way up the mountain. The final leg of the journey saw the team drive to Mount Snowdon in Wales, which they tackled successfully on Sunday afternoon.

The jam-packed 48 hours featured strong winds, heavy rain and localised flooding across the west of Britain, but the trained mountain leaders accompanying the team ensured everyone had the best time possible and helped to guide the group through the tricky conditions in the Lake District and Snowdonia.

Physiotherapist Natalie Gardner, who led on organising the fundraising event, said: “Everyone fought their own personal battles, and to see everyone smiling despite the pain, cold, rain, lack of food and lack of sleep made me so proud to be part of this team.

“I think it sums up what being an NHS worker is all about; despite the harsh reality of what we do, the long hours and difficult working conditions, we push through and do our best, and always with a smile on our faces because we know we are working for something bigger than each of us individually.”

Although the target they have set themselves is an ambitious £50,000, the team have already raised over £8,300 for the St Helier League of Friends to purchase equipment for the Critical Care Unit.

Michelle Corin, Speech and Language Therapist and member of the A Bit Peaky challenge team explained just why the piece of equipment is so vital to the acutely unwell: “Raising £50,000 will allow us to purchase a new state-of-the-art machine that will mean we can assess a patient’s swallowing in greater detail at their beside.

“Like breathing, swallowing is essential to life. As a speech and language therapist, I assess and treat people who have swallowing difficulties (known as ‘dysphagia’). Many people experience dysphagia after a serious event such as a stroke or critical illness, as part of a progressive disease such as Parkinson’s or Motor Neurone Disease, or simply as part of getting older. Dysphagia affects a person’s ability to safely swallow drinks, food, medication and even their own saliva! Dysphagia can be life threatening and often has a devastating impact on quality of life but despite this, it remains a ‘hidden’ disability.”

Chief Executive, Daniel Elkeles, said: “I am so proud of everything this team of staff have achieved. The weather was not kind to them but they all exhibited the sort of commitment, dedication and resilience that makes me proud to be Chief Executive.

“And the challenge has obviously captured the imagination of our staff, as other people in the trust have now come forward with ideas to help boost the fundraising. I would therefore like to say thank you to everyone involved and those who have made a donation to the St Helier League of Friends. The money raised will help make a real difference to our Critical Care Unit, where our sickest patients are cared for.”

You can find out more about their challenge and donate by visiting www.virginmoneygiving.com/team/abitpeaky.