A local couple who lost their baby daughter, Hope, in August of last year have launched a fundraising campaign for the Maternity Department at St Helier Hospital.

Hollie Perry and her partner Scott, who live in Carshalton, were over the moon when they found out they were pregnant with their first child last year, but following routine scans, the couple were asked to come back to hospital after a blood test showed some abnormal results. Another week of tests, second opinions and an incredibly anxious wait for Hollie and Scott ended when the couple were given the devastating news. 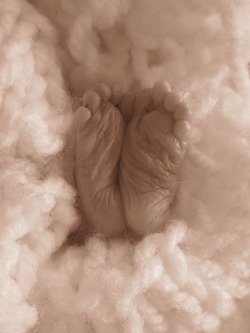 Hollie and Scott were told that their unborn daughter had Tripoildy syndrome – a rare condition that means the baby has an additional set of chromosomes and would be unlikely to live for long. Sadly, doctors could see that Hope’s heart, spine and stomach were not developing properly and that she would not survive outside of the womb.

Hollie and Scott made the heart-breaking decision to end their pregnancy. Hollie said: “Having to make the decision to end a wanted pregnancy is absolutely devastating, and I think the hardest decision any parent-to-be could possibly have to make. But we knew that we didn’t want her to suffer, and we were determined to do the best thing for Hope.” At 23 weeks, Hollie was admitted to hospital, and Hope arrived on Saturday 6 August.

Just over a year on, and the couple have launched a campaign to raise £20,000 to completely overhaul the bereavement room in the Maternity Department at St Helier, including new furniture, sound-proofing the walls, double glazing and new softer lighting.

Hollie explained: “After Hope arrived, we were given a cold cot [a cot that cools the baby and prolongs the amount of time parents can spend with their child] and were able to spend a night and day with her in the single bereavement room. We knew that we had to cram in a lifetime of memories into just a few precious hours, and we will both remember the time we spent in that room for the rest of our lives.

“You know that there won’t be any more bedtime stories, no singing happy birthday to her as she grows up, and so every moment in the bereavement room meant so much to us.

“The staff at St Helier were incredible, and I couldn’t have asked for anything more from them. But, there are some touches that could be made to the bereavement room that would make that precious time with your baby just a little more comfortable. That’s why we want to raise £20,000 to refurbish it completely.

“We will always treasure being able to spend time with Hope, dress her, take ink prints of her hands and feet, and we would like to be able to help other parents who are going through the same thing or something similar.”

Marion Louki, the Head of Midwifery and Gynaecology at the Trust, said: “We are so grateful to Hollie and Scott for sharing their story, and for launching a fundraising campaign for us during this incredibly difficult time.

“For most of the people we care for and support in the maternity departments, we are there for them during their happiest days. But sadly, that isn’t always the case, and it is absolutely vital that we can help parents who have had bad news, or those coming to terms with the death of their child. Nothing can take away the pain of losing a baby, but it is absolutely vital that we do everything we can to support families and individuals during these times.

“A new bereavement room would mean improved privacy, a quieter environment and more comfortable facilities. Every penny will count, so if you are able, please think about donating to this wonderful cause.”

You can read more about Scott and Hollie’s story on their dedicated website, Bearing Hope, and donate online on Hollie’s Just Giving page.