A Carshalton schoolboy is spearheading a fundraising campaign that has already raised over £650 for Queen Mary’s Hospital for Children (which is located on the St Helier Hospital site).

Each year, All Saints Carshalton Church of England Primary School chooses two charitable causes to champion and support through fundraising activities, and Alfie Scott, 10, was determined that Queen Mary’s would be one of them this year. He explained: “Every year the juniors get to make suggestions for which charity or cause we think the school should support. I had to give a presentation to the whole school to tell them why I thought they should choose Queen Mary’s and my ideas about how we could raise money for the hospital.

“I wanted to support something local to my school and where I live, but also something that was important to me personally: my cousin and one of my friends both have to go to Queen Mary’s quite often, so I thought it would be nice to do this as a thank you to the hospital for taking care of them. I was so pleased when I found out that the school had voted to have Queen Mary’s as one of the causes for the year!”

Thanks to support from his classmates, Alfie got his fundraising drive off to a strong start over the festive period with a special Christmas jumper day at school raising over £300. To help keep things going, collection buckets were passed around at school events, with generous parents and families helping to bring the total raised so far to £653.47.

Lorna Bramwells, Head of Nursing for Paediatrics and Neonatal, said: “I was just thrilled when I heard about Alfie’s efforts to support and raise money for Queen Mary’s Hospital for Children. What Alfie has achieved so far is absolutely fantastic, and the money he has helped to raise will make a big difference to our patients. I understand that Alfie has a number of other great fundraising ideas and events up his sleeve, which I am really looking forward to hearing about! 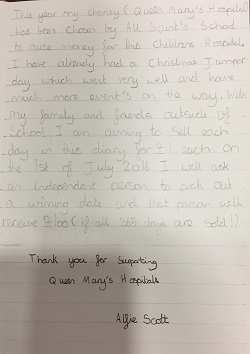 “We are very fortunate to receive a lot of support from local people, and I would like to thank everyone who has been part of Alfie’s fundraising efforts so far. But, most of all, a huge thank you to Alfie on behalf of everyone at Queen Mary’s – we are incredibly grateful.”

As for Alfie’s plans for the rest of the year, mum Carla explained: “Alfie has put a lot of thought into what else he and his school can do to keep raising more money for the hospital. Over the coming months he has planned a Mother’s Day bring and buy sale (4 March), a cake sale (22 April), and a dress up as a doctor, nurse or patient day (17 June).

“The biggest thing Alfie has got going on at the moment is his diary raffle for family and friends. Alfie had the idea to sell each day in a diary for £1 – once all the days have been sold, a winning date will be chosen and one lucky person will win £100. He has already sold 150 days of the year! He is really committed to raising as much money as possible for the hospital, and we are all just so proud of him.”