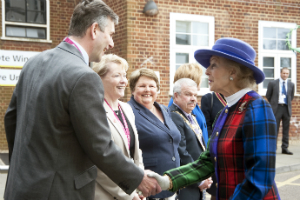 Proud staff from the department – which treats patients with disorders of the kidneys, ureters, bladder, prostate and reproductive organs – gathered to take the Princess on a guided tour of the centre before a commemorative plaque was unveiled and it was declared officially open.

The Princess also met with members of the team who helped build the new unit, as well as many of the doctors, nurses, consultants, and the hospital’s dedicated charities who have donated generously to the new centre. The refurbishment cost £700,000, with equipment worth millions more all housed in the centre.

Daniel Elkeles, Chief Executive said: "It was an absolute honour and privilege to welcome Princess Alexandra to Epsom Hospital.

"All of the doctors, nurses and other staff who work in the centre, and those who helped build it, are incredibly proud of the new urology unit. It is one of the biggest of its kind in the south east of England, and with experts across the field of urology specialties working so closely together, we are able to offer patients a superb level of care in an efficient and welcoming atmosphere.

“In the care of some of our urology patients, such as kidney and prostate cancers, receiving timely treatment can be a matter of life and death. We have to make sure that every part of the care we provide is the best it can be.

“We were delighted that Her Royal Highness took the time to hear more about the work that goes on in the centre, and to declare it officially open. It was a very special event for all those involved, and I would like to thank Her Royal Highness and our other esteemed guests for joining us.”

During the tour, the Princess was talked through the major benefits and achievements of the new centre, including:

In addition, there is a new reception area, new waiting room, new changing areas for patients and a staff room.

Following the tour of the new unit, Princess Alexandra met with other staff from the hospital, including Chief Nurse Carole Webster and Director of Estates and Corporate Projects, Trevor Fitzgerald. She also took the time to meet with volunteers who support the work of the hospital including members of the Epsom Hospital League of Friends (who donated a whopping £250,000 to the new centre) and Epsom Medical Equipment Fund.

The event was completed when Secretary of the Friends of Epsom Hospital, Kim Beevor, presented a bouquet of flowers to Her Royal Highness.