The group gathered in the Neonatal Unit at St Helier Hospital, which provides intensive and specialised care to babies who are born from as early as 26 weeks, to mark the event and to celebrate a whopping year of fundraising. Together, grateful families, staff from the Neonatal Department and the St Helier League of Friends have raised £25,000 in the last year alone.

The money raised has enabled equipment such as a cerebral function monitor, vapotherm unit (which supports the baby’s breathing), a mobile patient monitoring system, two baby weigh scales and two phototherapy units and much more to be bought for the unit, which cares for around 350 sick babies each year.

Andrew Reece said he, his wife Sneshka and “perfect” one-year-old Siena would have been “lost” without out the care they had received. The family raised a total of £3,300.

Andrew said: “World Prematurity Day is vital in raising awareness of ill babies. Siena was supposed to be born on January 20 2016, but was born on the November 11 2015. Having a premature baby is really scary, and at the time we had only had one National Childbirth Trust class – but the care we received was amazing. The staff just scooped us up and really looked after us. We would have been lost without them.

“We were really happy with the care we received. The nurses on duty always remembered what had happened with our baby previously, despite the fact they have a number of other ill children to look after. It was also the little things like offering to make my wife a cup of tea. I mean where would we have been without the NHS?”

Chief Executive Daniel Elkeles and Chief Nurse Charlotte Hall were also at the event to offer personalised thanks to all of the fundraisers and staff on the units. Daniel spoke of his pride in the “phenomenal” work carried out by the Neonatal Unit at St Helier and the Special Care Baby Unit at Epsom. He said:  “Each year, our units care for hundreds of babies, with some of our smallest patients weighing as little as 500 grams (equivalent to just two blocks of butter). Having to go through that as a new parent is understandably very distressing, but our teams of expert, compassionate staff truly make a difference to families in these situations.”

Charlotte said: “It was an absolute pleasure to be here today, and to meet just a handful of the 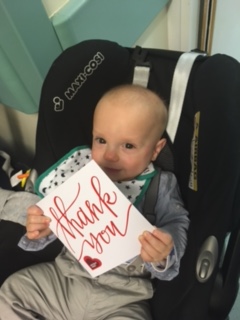 families that our teams have supported and cared for – that includes the Campbell family, whose triplet boys were born and cared for at St Helier earlier this year, and the Langleys, whose son Connor was born almost three months early. Also at the event was our long-term supporter, Theo the Magician and his daughter Elena who is now 15, she was born 10 weeks early.”