A young cancer survivor who overcame her fears to undergo a colonoscopy thanks to encouragement and support from NHS staff is urging people to get checked out if they are worried.

Jade Colburn, 28, was diagnosed with right-side colon cancer last year and has a simple message for people who have symptoms: “If you feel something isn’t right, push for an answer.”

This Bowel Cancer Awareness Month, the St Helier resident is sharing her story in a bid to highlight the illness, as well as thank the Epsom and St Helier NHS Trust staff who supported her and, ultimately, saved her life.

“Youngsters often feel like they are invincible and don’t believe they need to be checked,” said Jade. “I’m saying this as someone who should have done their smear test and has seen how men feel awkward regarding checks that involve private areas.

“Young people are often seen and told, ‘Oh, you are too young for this’. But if you feel like something isn’t right, push for it.” 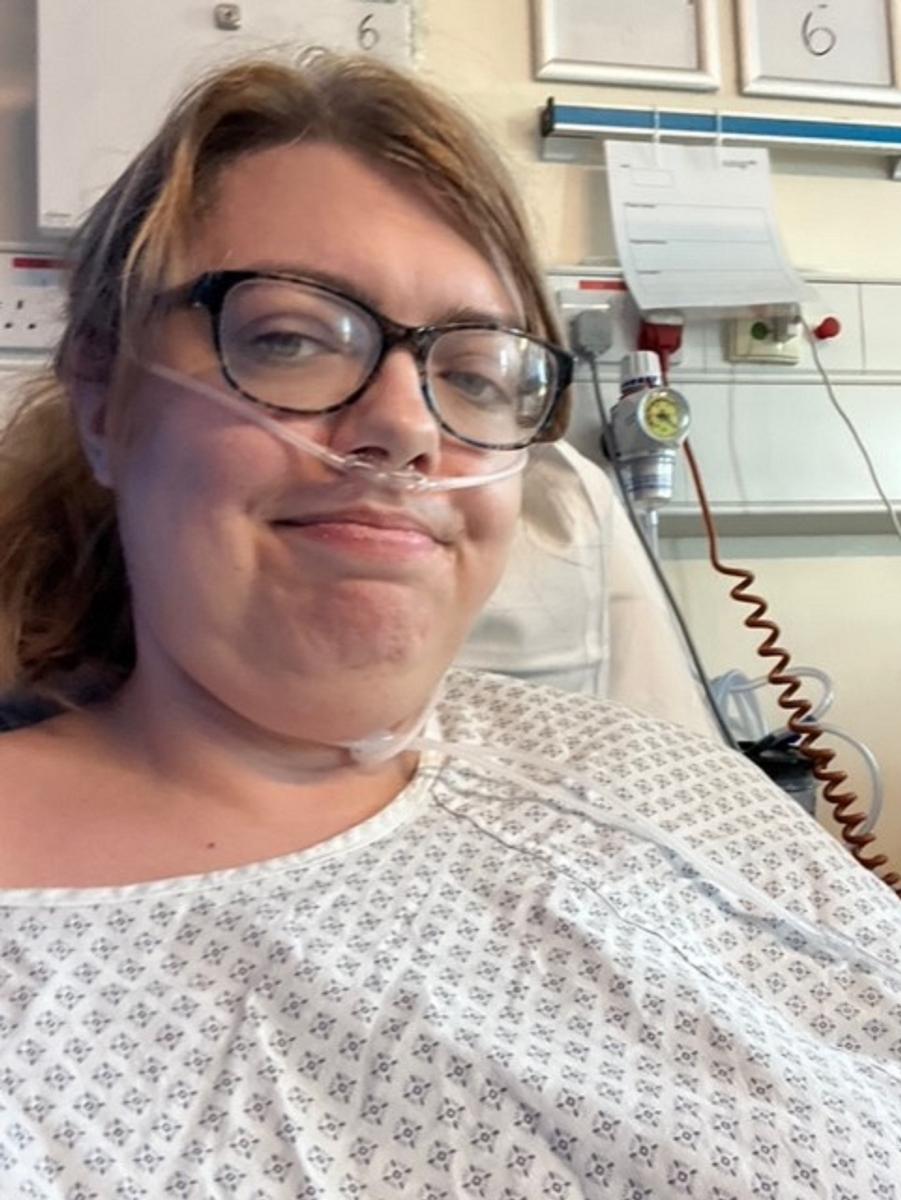 Jade, aged 27 at the time, first noticed symptoms in July 2020, when she struggled to breathe. She initially thought this was related to the weather and being at home a lot due to the pandemic.

She decided to ring 111 and was told to go to hospital as it was suspected to be Covid. While there she had blood tests, a chest x-ray and a CT scan, and was diagnosed with a bilateral pulmonary embolism.

Jade was prescribed blood thinners and spent a few days on a ward until her heart had returned to normal.

She underwent more tests, and remembers starting to feel more achy and breathless, with little energy.

“I called my GP who said he believed it was a viral infection,” she said. “I struggled to do daily tasks as I was able to do anything without coming over weak.

“Between Christmas and New Year 2020, I spent all time in bed and didn’t want to do anything! Looking back it was obvious I was anaemic badly. I collapsed in Morrisons with my legs going like jelly, and was rushed back to St Helier Hospital. Doctors were surprised I was walking about.”

Jade’s haemoglobin levels were really low and she had three blood transfusions in hospital and underwent more tests to see what had happened. Eventually, she was sent for a scan, which picked up the outlier on her colon, and was then placed on the cancer pathway and booked in for a colonoscopy to check inside her bowels.

She recalls this being “very nerve-wracking” – not just because of the procedure, but the preparation beforehand where she had to take laxatives so her bowels were empty for the test.

She added: “I was in a weird mindset, as a diagnosis helped me to understand the issues I had, it was not just in my mind, and we finally knew what had caused my illnesses. But on the other hand, it was scary as I had lost my grandad to cancer, so for me at the time, I related it to death.”

Jade was supported through the whole process by Acting Assistant Service Manager for Endoscopy Kim West and Macmillan Colorectal Clinical Nurse Specialist Paige Middleton, who encouraged Jade to have the colonoscopy when she showed signs of cancelling the procedure.

They were also there for Jade and her mum immediately after the diagnosis – and in the months that followed.

“I can’t say enough about these people, they have played a massive part in my story,” said Jade. “Kim pressured me into having the scan as she knew there was likely something there and I needed to get it checked. Paige is the best nurse-turned-mate. I know in her I have the ability to ask questions especially being so young and those awkward questions.

“My surgeon, Dr Gupta, and his team saved my life and I have been treated with respect. I was never spoken to like a child and I was treated like a young adult. The nurses at Epsom Hospital on the ward also helped me by chatting and making me laugh.”

Jade urges anyone who has symptoms or who has concerns to get checked.

“It’s better to catch it earlier,” she said.

“Cancer might be scary but it’s not a death sentence. It’s part of your story and you are a survivor and a champion.”

“A huge thank you to Jade for bravely sharing her story and raising awareness of colon cancer, and I also commend our wonderful, dedicated staff for their support and professionalism.

“Most people with symptoms do not have bowel cancer, but it’s absolutely crucial to see a GP if you do. Like Jade, you may be scared, but if caught early, bowel cancer is treatable and curable. Please do get checked out.”

The symptoms of bowel cancer can be subtle and do not necessarily make you feel ill. They can include:

Bowel cancer may lead to a lack of iron in the body, which can cause anaemia (a lack of red blood cells) – as in Jade’s case.

Most people with these symptoms don’t have bowel cancer – but you should see a GP if you have any of the symptoms of bowel cancer for three weeks or more.